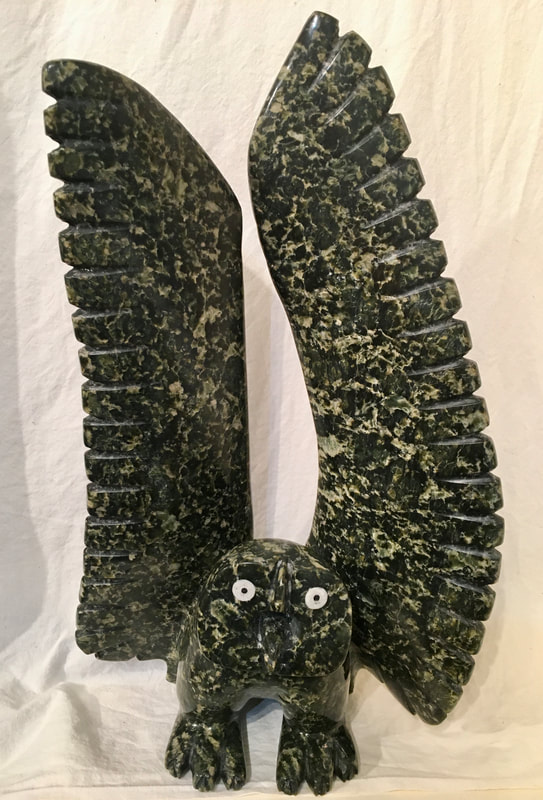 Son of master carver Lukta Qiatsuq, Padlaya, was born in 1965, grew up in Cape Dorset, Nunavut and started carving at age of 12 under the tutelage of his father.
Padlaya works in soapstone, bone and serpentine, a local carving stone named
“Green Stone” by local carvers, ranging from light yellow to dark green to black.
Cape Dorset carvings are recognized for their highly naturalistic forms and dramatic compositions carved from this famous ‘green stone’. This local serpentine stone used for carving has qualities that allow the artist to carve fluid outlines, daring and delicate lines and smooth, elegant finishes.
Padlaya has a deep respect for the land, and this admiration shows in his treatment of wildlife subjects. He says that he has fun making art and he likes to carve figurative works with transformational themes being his favourites.
He said: "I like to carve transformations. That's one of my favourite themes, and shamanism… when I do transformation or shamanism carvings, I hope the younger people will see the carving in a book or in a gallery. I want them to know that these traditions have to be carried out. How do I put this? They have to know that our ancestors had a hard time to live, to hunt. Sometimes they were starving. Those carvings are important to me and I want to show these younger people, and others, that this happened before."

Padlaya continues to live in Cape Dorset, serves his community with conviction as he become
​the mayor of the town.